This is one of the first things that caught my eye when doing research for my Thrive Protein Shake reviews.

You’ll see why in a minute.

Thrive, in case you don’t know, is a self-described “premium lifestyle brand” owned by a company called Le-Vel.

As a fellow small business owner that also sells a protein powder, I admire their product design and branding.

I don’t admire some of the stuff they put in their Thrive Mix protein shakes.

In this review, I’ll share some ingredients I found while analyzing the nutrition facts you might want to take a second look at if you care about your health.

The THRIVE Experience is a combination of our THRIVE Premium Lifestyle Capsules, THRIVE Ultra Micronized Lifestyle Shake Mix, and our Premium Lifestyle DFT (Derma Fusion Technology). Our premium naturopathic and synergistic formula of Vitamins, Minerals, Plant Extracts, Anti-Oxidants, Enzymes, Pro-Biotics, and Amino Acids is like nothing your body has ever experienced! It’s Ultra Premium at its finest. What’s even better is that the experience is gender specific for Men & Women. 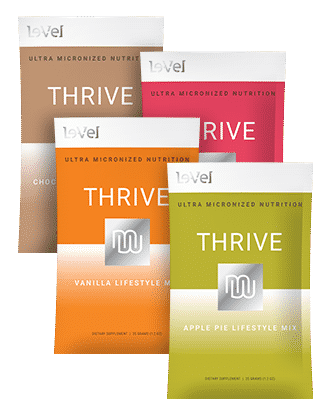 My analysis will only focus on their protein supplements called Le-Vel Thrive Lifestyle Mix Protein Powders.

Here’s how all my reviews work:

First I’ll show you the nutrition facts labels and ingredients for each Thrive Mix flavor. In the images below I’ve noted some “red flags”. I’ll explain what each of these means and why it should concern you further down the page.

If you want to read more Level Thrive reviews and see how their other supplements are rated, there’s a site called SiteJabber that grabs contains hundreds of consumers reviews. Here’s their conclusion:

LeVel has a consumer rating of 2.82 stars from 325 reviews indicating that most customers are generally dissatisfied with their purchases. Consumers complaining about LeVel most frequently mention customer service, auto ship and credit card problems.

Here’s what’s in each of Thrive’s protein shakes …

Lots of red flags here! Here’s why I flagged each:

Bottom Line: Is Thrive Protein Powder Good for You?

The saying “not all shakes are created equal” is proven true by our ultra micronized Premium Lifestyle Mix, which is in a category all by itself.

Actually, it’s in a category that’s quite familiar in the protein powder industry: corn-based fillers, gums, thickeners, and artificial sweeteners.

In my humble opinion, Le-Vel Thrive Protein Shakes are simply just another protein powder filled with the same old junk everybody else uses.

The facts are Thrive a) is not organic; b) contains an artificial sweetener that has been shown to cause cancer in animal studies; and c) contains other additives, fillers, and emulsifiers.

My $0.10: Stick with a protein powder that has all-natural, organic ingredients instead.